...a man named Leonard Knight. Well, the very last thing I wanted to do was to go out and have some Bible 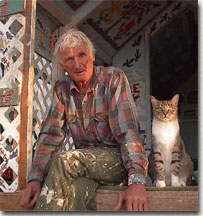 thumpin', fire and brimstone spittin', religious zealot throw down his soapbox and tell me that if I didn't repent this very minute, that I would be damned to hell for all eternity. The man I met could not have been more the opposite. Leonard is probably one of, if not the most, genuine, gentle, unassuming, friendly, and sincere men I have ever met. His only agenda is the mountain - nothing more - but nothing less.    [Back]